Hello Ladies and Gentlemen! (Please read this next part in an English accent) We have finished! The curtain is drawn! The lights are down! The night is nigh! It is now a memory! The Stage is Bare! The show is over! But not forgotten!

But in all seriousness, this is my first time in the office since we wrapped up the 2019 ASPIRE performance “365 Questions, Issues and Good Deeds”. Production week was a crazy experience which resulted in a show that all the staff and students were proud of.

In the lead up to shows, I got to sit in on the Production Ensemble Director (and Stage Manager) Loretta, Anna and the Civic Theatre Technical Coordinator Lachie as they plotted the lights. However, this wasn’t done in the Civic as it had been in previous years, we worked in a location much more romantic than the theatre – a small dark room in Cardiff where the hum of amps and various machines made it feel as if we were on a plane. It was a pretty amazing thing to watch, there was a program that basically modelled the civic theatre stage, along with all the lights, meaning we could essentially plot all the lighting cues before we even hit the stage. In reality, we only got halfway through which was still a lot better than the year previously.

Soon after, we were in production week. The Production ensemble started bump in on Saturday and I joined them from Sunday onwards – it was a stressful and tiring time with the production students (and some of the staff) doing three days of 8am-10pm work. The senior singers and actors arrived Sunday afternoon for sound check while the other ensembles stayed at Pius. By Monday it was all 140 students crammed into 9 dressing rooms for tech rehearsal. As usual this ran late, so we had to finish the tech on the Tuesday morning before the full-dress rehearsal – which ran okay. One of the design girls, named Caitlin, was elected to help James (Head of Sound, Civic Theatre) with sound and mics for the entire show. She was doing a fantastic job and had completely marked up the script with mic numbers, but she fell ill right before the dress rehearsal – I was tasked with stepping in and although James got a little disgruntled with me, we stumbled through until Caitlin rose from her grave to take hold of the reins once more.

By then the easy part had arrived, the shows. Wednesday ran well, with a few hiccups, namely when the stage was left in silence for 30 seconds with some miscommunication backstage. But by Thursday things were running like a well-oiled machine. Things were interesting and busy behind the scenes, all the dressing rooms had been established, however there was some movement as cast members engaged in mutiny and moved changerooms semi-permanently. The best-decorated room has to be a tie between the Junior Dancers and Junior Drama, each of which had printed off their own ensemble names to put on the door along with fairy light in the room – the dancers even had paper cut-outs of little dancers around the room. Yet, maybe by coincidence or otherwise, these were in fact the two messiest rooms after the students cleared out on Saturday night.

Friday and Saturday were another 2 big days, with matinee and evening performances. As per tradition, during the breaks the cast went out to various shopping centres before getting blasted on junkfood and running around like maniacs (you have truly reached adulthood when you have a go at kids for eating ‘junkfood’ – I can now view myself as a man). This naturally induced some food comas and perceived sickness, which usually alleviated by the time the curtains rose. During these performances I was primarily in the mics room, with the rest of the design ensemble – this was challenging and it made the performances fly by particularly when I discovered there was a stash of crustkits and Coles cheese in the fridge which I disgracefully took advantage of. My other role was to provide a calm and youthful energy back stage (joke) while attempting to solve any problems that arose.

The final performance was an emotional once, with a lot of salty faces as the cast hugged and said goodbye. To the year 11’s and those not coming back next year, I wish you all the best.

I felt honoured and privileged working with this awesome cast of amazing young people, I will never forget Aspire 2019. 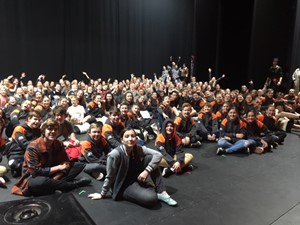